In general, I write about the differences between the UK and New Zealand. In this case the similarity is striking. Donald Trump’s decision to issue an executive order re-imposing the ban on NGOs that provide abortion services or offering information about abortions if they receive US funding, has been stridently condemned in the UK and in New Zealand.

It is the lead opinion piece in The Guardian today. And it is the lead article on Stuff. Both take aim at this picture in particular: 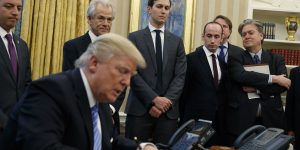 This might, of course, be the usual luvvies in the Main Stream Media – but it is an opinion shared by my those I talk to here. Summed up nicely by Martin Belam, Social & New Formats Editor at The Guardian, who tweeted; “As long as you live you’ll never see a photograph of 7 women signing legislation about what men can do with their reproductive organs”.

Presumably this will be reversed by the next president. In the meantime it is hard not to worry that this will not prevent abortions, but it will prevent safe abortions.