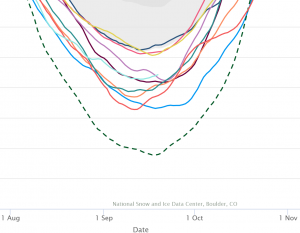 The lowest horizontal line is 3m Km2, rising in increments of 0.5m Km2. The 2017 line is the blue line (or green depending on your eyes / screen) that finishes in mid-September.

Figures for annual minima are:

There is no trend here. You can inspect my graph here.