The next meeting of your Local Plan Committee is this Thursday at the council offices in Weeley (Thorpe Road, Weeley, CO16 9AJ) starting at 18:00 (6:00pm). The reason for making this special appeal is that I fear the Country Club majority on the committee (Conservatives and their [not very independent] Independent friends) are planning to force through a draft Local Plan that contains a figure for new houses that is OBVIOUSLY TOO HIGH. It would be excellent if a lot of residents came and made their views known.

In this endeavour they are being ably assisted by the officer responsible for the development of the local plan is Simon Meecham. He is not a Tendring resident and is not directly employed by Tendring District Council. He is a director of Paradigm Planning and Economics who has been employed as a consultant. He will be gone the moment a local plan is approved. For those with the interest you can see what Mr Meecham says about himself on his LinkedIn Profile . In my view, he has an interest in getting a plan in place, but no interest in getting the right plan in place. 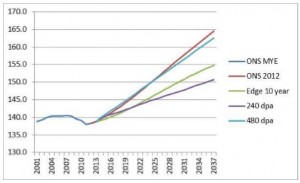 The heart of the problem is this graph. We are currently being presented with a population forecast for Tendring that rises sharply from now until 2037, despite the fact that the population has been flat from 2001 until now. The forecast driving the plan is the blue one entitled 480 dpa (not quite the highest forecast on this graph), which translates into a requirement for Tendring to build 550 houses per year; once ugly, but possibly unavoidable, add-ons have been added on.

I have written to Mr Meecham, copied to all the members of the Local Plan committee, about this and you may read that letter by clicking on this link Local Plan eMail 2016 01. You might click on the link just to get a clearer look at the graph.